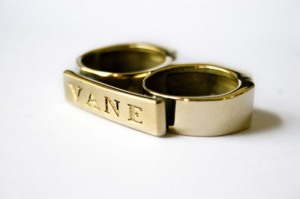 Well, I haven’t written a blog post in almost a week.  Strange feeling since I’ve been blogging almost every day since the year began.  Liberating feeling since I was blogging on a daily basis because I had something — YET AGAIN — to prove to myself.  Oh brotha!

I’m glad 2011 is the year of stabbing The Brass Ring — concept and way of life — in the heart and laying it gently on the ground to die.  Like I mentioned in a previous blog post, I’m dedicating this year to cultivating the 5 primary characteristics that, in my experience, open up the depth and dimensionality of my perception and thus make me feel most wholly fulfilled:

Definition of The Brass Ring according to:

Wikipedia: The brass ring as a term also means striving for the highest prize, or living life to the fullest.

TheFreeDictionary.com: n.Slang An opportunity to achieve wealth or success; a prize or reward.

This is how I’ve come to identify and pinpoint The Brass Ring: It pulsates at the center of your Ego — as its primary desire.  Your Ego’s sole purpose in life is to achieve it.  Your drive to get The Brass Ring corrodes the pure joys of your spirit with “alterior motives.”  Let’s take, for example, 2 types of filmmakers:

1) The filmmaker who is one because they like being called “The Filmmaker.”

2) The filmmaker who is one because they really love making movies.

A book was recently published explaining how to raise Brass Ring-driven children. It’s titled Battle Hymn of the Tiger Mother and is summarized by NPR (click here to listen to the 11 min podcast) as:

“Strict, uncompromising values and discipline are what makes children raised by Chinese parents successful. That’s the message in a new parenting book by Yale Law Professor Amy Chua. “Battle Hymn of the Tiger Mother,” based on Chua’s personal experiences has raised questions about whether the book reinforces stereotypes of the unsparing Asian parent.”

Last week, Penguin Press published Amy Chua’s book Battle Hymn Of The Tiger Mother, which criticizes “Western” parenting and advocates an “Asian” approach that includes forbidding playdates and being highly critical of children in order to make them more successful. Here are some other tips from the book:

Mind you, I have yet to read the book.  I plan on it.  For now, however, I’m just enjoying reading other people’s outcries about it a.k.a. watching us react in horror toward/abhor a darwinistic way of thinking that we Americans — Chinese, Cuban, Jewish, Indian, Anglo-Saxon Protestant, etc  — have ironically been taught to regard as “ambitious” and “industrious.”   Of course, Americans live the varying degrees between the opposite extremes of The Brass Ring way of life.  Obviously, we’re not known the world over for our overachieving attitudes.  Still, The Brass Ring way of life exists at the core of our national spirit, raging with the ferocity of adolescent hormones: “Compete and win.  Prove you’re the TOP DAWG!”

Even our president Barack Obama, in his recent State of the Union address, declared he’d tenaciously go after The MOTHER of Brass Rings:

“…So, yes, the world has changed. The competition for jobs is real. But this shouldn’t discourage us. It should challenge us. Remember — for all the hits we’ve taken these last few years, for all the naysayers predicting our decline, America still has the largest, most prosperous economy in the world. (Applause.) No workers — no workers are more productive than ours. No country has more successful companies, or grants more patents to inventors and entrepreneurs. We’re the home to the world’s best colleges and universities, where more students come to study than any place on Earth.

What’s more, we are the first nation to be founded for the sake of an idea — the idea that each of us deserves the chance to shape our own destiny. That’s why centuries of pioneers and immigrants have risked everything to come here. It’s why our students don’t just memorize equations, but answer questions like ‘What do you think of that idea? What would you change about the world? What do you want to be when you grow up?’

The future is ours to win. But to get there, we can’t just stand still. As Robert Kennedy told us, ‘The future is not a gift. It is an achievement.’ Sustaining the American Dream has never been about standing pat. It has required each generation to sacrifice, and struggle, and meet the demands of a new age.

And now it’s our turn. We know what it takes to compete for the jobs and industries of our time. We need to out-innovate, out-educate, and out-build the rest of the world. (Applause.) We have to make America the best place on Earth to do business. We need to take responsibility for our deficit and reform our government. That’s how our people will prosper. That’s how we’ll win the future. (Applause.) And tonight, I’d like to talk about how we get there…”

I’m not saying that there’s anything wrong with striving to realize one’s full potential on an microcosmic individual level and a macrocosmic national level.  I feel that, in fact, it’s the duty of every human being to do their personal best.  I’m questioning the motivations behind the drive.

Do you work hard on bettering your nation so that it’s considered better than all other nations or do you work to better it so that your citizens live a healthy and fulfilling quality of life?  Do you study for countless hours so you can Ace the math exam to prove to yourself and others that you’re an “A” student or do you study to learn the material and take pride in the “A” grade because it ultimately reflects how much — through hard work and dedicated focus — you learned on the subject matter? Do you make a caliber kick-ass film in order to walk down the red carpet, screen at Sundance, and win an Academy Award in a designer dress or do you make a caliber kick-ass film in order to connect with other human beings and hopefully add to their experience by sharing a story that exposes and explores a subculture dear and meaningful to your existence?

I’m truly coming to understand in my old age ( ;p ) that intention decides the consequence of an action because it points that action toward a direction.

For instance, I was researching and compiling a list of bloggists and blogs, which inspire and teach me, where I’d like to submit my book for review, and I came across this fantastic article in The Guardian about a Japanese woman who became a best-selling poet at age 99.  She sold 1.5 million copies of her first book — a self-published collection of poetry — “in a market where 10,000 is seen as a success…”

I immediately clicked on the piece and read it from head to toe.  I was profoundly inspired by it.  I had to ask myself, “Why am I so elated?”  What was it about her story that so inspired me?

Was I inspired because of My Ego’s obsession with The Brass Ring?  In other words, was I inspired by the story because the Tiger Mother inside, that part of me that says “WIN so you’ll KNOW you’re not a failure,” is thrilled at the prospect that I have until age 99 to prove I too can become an overnight-sensation best-selling poet?

Or was I inspired because, according to the article’s description of her, she’s a humble, grateful, compassionate, fearless, and peaceful old woman who brazenly took up the pen as a new way to express the pure passions of her spirit when her body became too old to continue realizing them through dance?

“She was encouraged to write poetry by her son, who is in his mid-60s, after recurring back pain forced her to give up her lifelong hobby of classical Japanese dance.”

Quite honestly, I’m sad to say, that my ego was inspired first.  It became inflated to exaggerated proportions with grandiose visions of receiving public acknowledgment, reverence, and acclaim.  The Brass Ring dangled before my Ego like a Cannabis Card before a stressed out pot-head.

The spirit beneath my ego, however, squirmed … writhed with disapproval.  I can no longer react blindly toward the whims of my ego — I can no longer give into its lazy and polluted cravings.

If I’m ever going to be substantially fulfilled, I must remain aware of my tricky Ego and its Brass-Ring drive.   Consequently, I must think, feel, and act opposite to its inclination.

Thanks for being an example of humility, gratitude, compassion, fearlessness, and peace, Toyo Shibata.  I can’t wait to order your book.  Big hug your way! 🙂 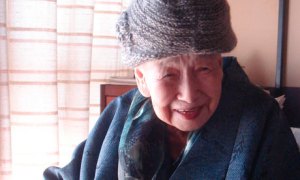 I really do believe that choosing to be a citizen rather than a simple consumer is an essential, deliberate, and potentially-radical act. – Darren Hughes

Vanessa Libertad Garcia is a Cuban – American writer & filmmaker who grew up between the burbs’ and hoods of Los Angeles. A graduate of Loyola Marymount University, she’s completed a myriad of successful projects that tackle both the film and literary worlds. Ms. Garcia has worked in various capacities as writer, director, and producer on fiction films such as the HSF/McNamara Arts Grant recipient “A Two Woman One Act” and documentaries such as “Maid in America,” which debuted on PBS’ Independent Lens. Two films out of the many, which have screened at top festivals such as The Los Angeles Film Fest, The Habana Film Fest, Cinequest, and Outfest to name a few. Ms. Garcia has had writings published by venerated literary staple Lambda Literary and the up-and-coming Amor Fati. Her first book “The Voting Booth After Dark: Despicable, Embarrassing, Repulsive” is drawing laudable reviews. It’s available for purchase at amazon.com, barnes&noble.com, and many other sites. She presently has a feature film titled “Dear Dios” based on the books’ characters and a second book — the collection of poetry “Bloody Fucking Hell” — in development. END_OF_DOCUMENT_TOKEN_TO_BE_REPLACED
This entry was posted on Thursday, January 27th, 2011 at 1:32 am and tagged with battle hymn of the tiger mother, filmmaking, making a movie, parenting, poetry, spirituality, the brass ring, the ego, the spirit, Toyo Shibata and posted in Art & Culture, Life & Career, Uncategorized. You can follow any responses to this entry through the RSS 2.0 feed.
« The Penguin, The Ego, & OMG Celebrity Yahoo News
Spirituality Apps for Android & Facebook »