Alas, this Tuesday, per the usual, I found myself miserably overwhelmed with the mounting To Do’s and exasperatedly conflicted about how to approach/attack/attack/approach … walk with grace and serenity onto the beautiful and mortifying yellow brick road of my unfolding life.  Fear of the unknown flogged and beat and raped me into a state of paralysis.  Instead of checking off my various To Do’s with vigorous glory as I’d fantasized doing while lying in bed on Monday night  — I spent most of Tuesday hiding under warm covers, venturing in and out of various states of consciousness.  Nightmares about serial killing con artists in the afterlife plagued my sleep; and Dreams about making my art (books & film) the world over and living comfortably off of their profits plagued my wake.

I’ll give you a quick download of the events taking place within the next 4 months: 1) Going to Grad School for my Masters in Film Theory.  Begin Fall 2011.  Woohoo!!!! 2) Must find summer job that pays more than present part-time job because I need to move out of my studio and closer to college. 3) Need to find new cheap studio or bedroom to move into — preferably with own side entrance. 4) Finishing Promotion rounds for my debut book The Voting Booth After Dark: Despicable, Embarrassing, Repulsive.  This entails contacting last round of potential reviewers, doing research on Universities & their Women’s, GLBTQ, Latino, & Mental Health studies Departments and pitching their professors my book as possible college course reading material.  As well as offering myself up as an expert speaker on the topics my book discusses: Latinos, Queers, & Addiction within both minority communities.

These are all AMAZINGLY splendid opportunities for personal betterment, I understand.  They’re also 150% mortifying since their manifestations seem to rely on one sole person: Muah.  Now I know that’s not true as I’m blessed to have a phenomenal support system of friends & family, therapy, prayer/meditation, etc … But knowing intellectually and feeling experientially the truth and untruth of something are two entirely different realities.  Suffice to say, I’d had ENOUGH of obsessing about how best to control the outcome of my life.  It was time to check into somebody else’s.

According to It’s Complicated Hollywood continues its beige, more so egg-white, denial of  The Great Recession, which we — as a colorful multicultural country — are still experiencing.  And no, adding an affluent overly-tan Jewish family to an all white-cast does not diversify it.  Thanks for reminding us all of that, Meet the Little Fockers.  In case you haven’t noticed, Jews have ceased being a cinematic minority since 1960. 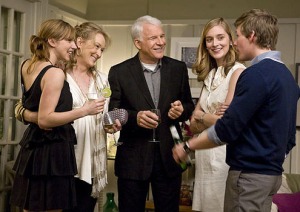 You may be asking yourself right now, “Byatch, why in the hell did you choose, out of ALL movies in the world, to check out on this one?”  I’ll tell you … I don’t own any DVDs except for The Kid Stays in the Picture, which I can’t NOT own because it’s my favorite documentary.  I don’t own any dvds because there are TOO many films that I love and if I own 2 of them, I have to own all of them and that would add a lot of clutter to my life.  Therefore, I had literally 1 movie to choose from.  Netflix streaming doesn’t work on my aunt’s Mac iBook G4, which I’m borrowing at the moment, due to the fact that it’s 1) Ancient and 2) Doesn’t have Intel Pentium blah blah.  I had -$29.35 in my bank account and didn’t get next paycheck until Wednesday so I couldn’t afford to rent a movie.  Thus, I only had my cousin’s collection of dvds to choose from.  Mind you, he’s a 28-year old guy with a girlfriend so it was either 300, The Godfather, or It’s Complicated.  300 is a racist piece of Western-loving Eastern-hating trash, which was not going to make me feel ANY lighter.  I’ve seen The Godfather about 30 times and as much as I love it, it was not going to take me from a dark place into a shinier one.  So I thought, maybe It’s Complicated will cheer me up a bit.  Also, Meryl Streep was in it and I could watch her act in anything.  She’s a bloody genius and a goddess.

As expected, Streep delivered.  She was endearing, lovable, and charming.  The rest of the film, however, was immensely depressing.  It wasn’t necessarily a bad movie. It appropriated all the classic cinematic conventions as it should have.  The movie was, you know, okay.  There was nothing imperfect about it.

In fact, it felt like watching a vacuum cleaner do its job right.  You’re like, “Yeah, my carpet’s clean.  That’s nice.”  Then you sit back down on your couch and realize you just watched a vacuum cleaner for 2 hours.  Depressing.

Let me elaborate:  The story was about a privileged anglo family who went through a mildly quirky set of circumstances (within cush surroundings), which ultimately brought them just a little closer together in the end.  Awwww, who cares.

It felt like I was watching holograms interact.  Where’s the humanity, the frailty, the vulnerability, the struggle, the triumph?  Where was its resemblance to reality?  It seems to me that the studio system has murdered every last introspective, reflective, existentialist romantic comedy writer in Hollywood.

Why couldn’t It’s Complicated have been Annie Hall?  Better yet, Annie Hall with some Cubans and Vietnamese 😉

Suffice to say, Tuesday was crap all the way through.  The Upside: Wednesday rocked.